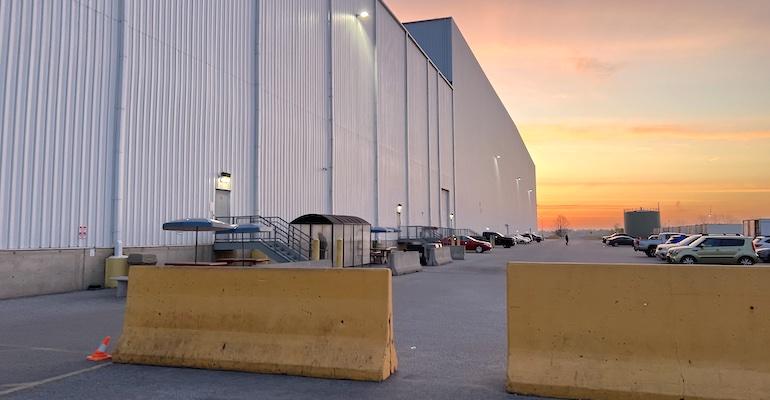 Continuing a shift toward self-distribution, Ahold Delhaize USA has integrated a distribution center in York, Pa., into its self-managed network.

ADUSA Supply Chain, the grocery retailer’s distribution and logistics arm, said Monday that the addition of the automated York DC — now the largest in the network — brings total number of self-managed facilities to 22.

The York DC adds 1.2 million square feet of grocery capacity, fulfilling non-perishable products for nearly 400 Giant Food and Giant/Martin’s (The Giant Company) stores. ADUSA noted that the building is more than 10 stories, a height needed to accommodate 110-foot cranes for selection automation. The company noted that the cranes are part of a technology stack that also includes palletizing automation and a proprietary workforce management system.

About 1,000 people are employed at the York DC, many focused on maintaining its technology, according to ADUSA. Procurement at the site is managed by ADUSA Procurement, while C&S Wholesale Grocers — from which ADUSA acquired the York DC — continues to provide third-party labor services.

“I’m incredibly proud of all the teams who came together to successfully transition this site,” Bob L’Heureux, vice president of supply chain strategic initiatives for ADUSA Supply Chain Services, said in a statement. “We’re excited to have this facility as part of the self-distributed network and look forward to all it will deliver for our companies near-term and in the future.”

Under a three-year supply chain transformation unveiled in December 2019, Zaandam, Netherlands-based parent Ahold Delhaize plans more than 85% of its U.S. distribution network — integrating brick-and-mortar and e-commerce — to be self-managed by the end of 2022. The company hit its 2021 transition target last October, with the network reaching self-managed center-store volume of 65%.

In March, Ahold Delhaize USA converted its 1.2 million-square-foot DC in Bethlehem, Pa., to the self-managed network, marking its first facility to make the shift in 2022. A leased facility acquired from C&S, the Bethlehem DC serves the Stop & Shop and The Giant Company stores and e-commerce centers.

Plans call for ADUSA to convert more two DCs to self-management this year, which will bring the total number of integrated self-distribution facilities for store and e-commerce fulfillment to 25, up from 15 when the $480 million plan was announced.