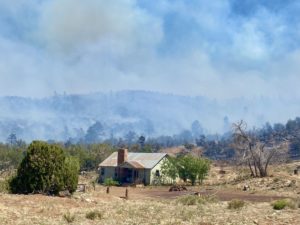 Billy Cordasco and Ryan Butler sat on a hilltop behind Cedar Ranch and watched as the Slate Fire pushed its way east through juniper, pinyon and ponderosa pine forest from Highway 180 toward the historic ranch house, barn, wells and pipeline north of the San Francisco Peaks. Cordasco, president and general manager of Babbitt Ranches, is a fourth generation descendant of the original Babbitt brothers who started the ranching empire here in the late 1800s. Butler is a fire division supervisor for the Forest Service, called in from Montana.

A small helicopter was being used to drop water on the fire front. But as the two men watched the blaze spot ahead of fire lines, areas that had been cleared of fuel like shrubs and trees, the plan changed. “I’d never seen juniper burn like that,” said Butler. “The masticator was masticating trees and they would burn. In Montana, it would take years for them to dry out and become flammable. Usually during the day in juniper, the fire dies down at night, but not in this case. Even with heavy equipment, we couldn’t get a line around the fire.”

Butler called off the helicopter and gave the order to back burn – essentially using fire to fight fire – away from the ranch house, creating a buffer around the historic site and leaving nothing to burn between it and the flames. And it worked. The only structural damage was part of a power line that melted.

Besides being an important cowboy headquarters, Cedar Ranch was a stagecoach stop in the late 1800s. Tourists would spend $20 to ride from the McMillan hotel at Leroux and Santa Fe Avenue to Grandview Point at the South Rim of the Grand Canyon. The trip included three stops where the team of horses was changed out. One of those was at Cedar Ranch.

“For the horses to drink out of the spring, they got big old pine trees, carved them out and lined them up in a series coming down from the spring. And, that’s how they moved the water,” said historian Jim Babbitt.

Today, Cedar Ranch is still important to the ranching operation. Also, recreationists from around the world cross through this part of Babbitt Ranches on the Arizona Trail, which parallels the old stagecoach route. Sections of the trail, like this one, are currently closed, along with the Coconino, Kaibab, Apache-Sitgreaves, Prescott and Tonto National Forests.

“Even though we have received some rain in parts of the forest recently, we are still experiencing very dry conditions that have kept our fire danger at Extreme,” said Coconino National Forest Public Affairs Officer Brady Smith. “The full closure of the forest is necessary to help reduce the risk of wildfire and remove the human component from that risk while we fight large wildfires currently on the forest. Our law enforcement officers, fire prevention personnel and forest protection officers will be patrolling to ensure compliance with the closure order, and we’re asking folks to please comply with the closure – even if it looks OK to enter.”

The Slate Fire, which has charred more than 11,000 acres about 23 miles northwest of Flagstaff, started on June 7, and is still burning. It is one of at least 15 major fires on the Arizona landscape, making this the worst wildfire season since 2006.

Years of drought have made cattle ranching challenging here. Babbitt Ranches water hauler Jack Rodgers has been distributing truckloads of water across Northern Arizona almost daily for more than a year, filling dirt tanks for livestock and wildlife. Between May 1 and the second week in October 2020, he had personally delivered 1.6 million gallons. (See related story on page 13.)

The dry conditions and dangerous fire situation are impacting other businesses operating on forest land as well. Gondola cabins hang motionless above the forest canopy at Arizona Snowbowl. Ski resort managers had planned for a busy summer with the new Scenic Gondola whisking sightseers to 11,500 feet for a top-of-the-Peaks view.

“The forest closure definitely has a pretty big impact on us,” said Snowbowl Marketing Manager Li Cui. “We’ll be closed for summer operations in the short-term until the forest can reopen again. While this is unfortunate, we understand that this is a necessary measure to keep our forests and our community safe during a time of elevated fire danger and limited firefighting resources.”

Seasonal workers will not be working until Snowbowl can reopen, but Cui says full-time year-round employees will continue working during this time, as well as employees at Ski Lift Lodge and Restaurant. “When we reopen, we look forward to welcoming guests back to scenic rides on the Arizona Gondola, summer activities at the base area and on-mountain dining at Agassiz Restaurant.”

At nearby Arizona Nordic Village, which had been a refuge for outdoor enthusiasts during the pandemic, staff members have had to send campers packing. “We had become more popular in recent months than even before the pandemic, but the forest closure is not great for business,” said Nordic Village Manager Theo Callan. “We’ve had to cancel so many reservations and had to lay off three people until this is over.”

Events like music camp and a bike race have been canceled. Callan is hoping weddings scheduled later this summer will not be impacted.

During the closure, some employees are being allowed onsite to continue making improvements on the property. “We look at this as a little break for us to focus on other projects so that when we’re back open, we’ll be even better than we were.”

In the city, Flagstaff has entered into Stage Four fire restrictions. This means all outdoor grills are prohibited, including propane gas, charcoal, pellet and any open flame grills. Sections of the Flagstaff Urban Trails System (FUTS) that provide an entrance into the Coconino National Forest are closed. And, Observatory Mesa and Picture Canyon City Open Space lands are off limits to the public.

Dangerously dry conditions also have necessitated the cancellation of Fourth of July fireworks in Flagstaff.

“Flagstaff’s forests are beautiful, but very dry,” said City of Flagstaff Economic Vitality Director Heidi Hansen. “Therefore, there was a need to go to Stage 4 fire restrictions and close all forests and trails for the time being.”

Lowell Observatory, operating on Mars Hill, which borders the Coconino National Forest and the city, is following their lead. “This means walkers and bikers can’t use Lowell’s land right now. The bigger impact is that both our Anderson Mesa and Lowell Discovery Telescope sites are on National Forest land. Without access to the sites, scientists can’t observe through telescopes at night and engineers aren’t able to care for the instruments and facilities,” said Lowell Historian and Public Information Officer Kevin Schindler.

Meanwhile, the closures, which may impact the number of tourists to the mountain town, could create more challenges for local small businesses that have been adapting throughout the pandemic and current labor shortage.

“We hope that travelers will continue to visit Flagstaff through the forest closure, as we have many other things to offer during their stay – cool temps, starry skies, great brews and food, and much more,” said Hansen. “We ask that visitors please stay and play responsibly.” FBN