Craig Calhoun, senior sustainability scientist at the Global Institute of Sustainability and Innovation and a University Professor of Social Sciences, will be stepping in as interim director of the Melikian Center for Eurasian and East European Studies for the 2021–2022 academic year. The Melikian Center’s director, Keith Brown, will be on research leave as a visiting fellow at the University of Helsinki’s Collegium for Advanced Studies.

Find out what’s happening in Scottsdale with free, real-time updates from Patch.

Ramona Melikian, president of the Melikian Center’s advisory board, praised Calhoun’s experience: “As the Melikian Center enters a new phase of global engagement, Dr. Calhoun’s impressive background offers us the opportunity to increase our global visibility and enhance our partnerships with the international community — contributing significantly to the further growth of the university.” 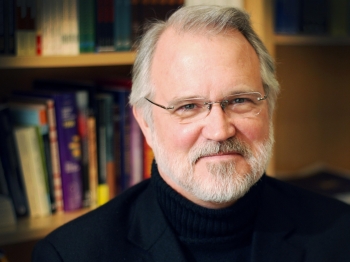 Prior to joining ASU, Calhoun was director of the London School of Economics and Political Science, president of the Berggruen Institute and president of the Social Science Research Council. In the course of his productive academic career, Calhoun has taught at the University of North Carolina at Chapel Hill, where he was dean of the Graduate School and director of its Center for International Studies; served as a professor at Columbia University and the University of Oslo; and was founder and director of the Institute for Public Knowledge at New York University.

Find out what’s happening in Scottsdale with free, real-time updates from Patch.

A throughline of Calhoun’s academic work is exploring how the sciences and public policy interact and engage with the public. This thematic core distinguishes Calhoun as a public-facing scholar whose work embraces Arizona State University’s ethos of community engagement. Beyond ASU, Calhoun co-chairs the board of the American Assembly, a think tank that aims to strengthen democratic societies. He has been elected a fellow of the British Academy, the American Association for the Advancement of Science, and the American Philosophical Society, and he is a member of the Council on Foreign Relations. He holds honorary appointments as a Centennial Professor at the London School of Economics and a professor at the College d’Etudes Mondiales of the Maison des Sciences de l’Homme in Paris.

“The Melikian Center has established itself as a central part of how ASU helps all of its constituencies understand the world. It’s important to students, to faculty and to communities outside the university,” Calhoun said. “I say the world because the world is understood through different regions. And the Melikian Center helps us understand first the relations among Russia and East Europe and Eurasia, and second, the relations between all of them and the rest of the world. We will also focus on sustainability questions which are major issues in each of these regions. And we can learn from this region in ways that matter for understanding the whole world and each of its challenges for sustainability.”

In this web-based, immersive environment, undergraduate students will explore polar environments in the Arctic to learn about permafrost from their laptops, desktops or mobile devices. 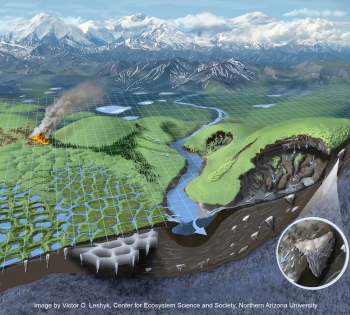 “The real-time transformation of the Arctic affects everyone, but most of us can’t travel there to witness these changes,” said Deborah Huntzinger, project principal investigator from Northern Arizona University. “Polar Explorer will take students deep into thawing permafrost and to the edge of Arctic shorelines to learn about how the region is changing in an immersive, accessible way.”

Huntzinger is joined by co-principal investigators Ariel Anbar and Chris Mead of ASU’s School of Earth and Space Exploration and Center for Education Through Exploration, as well as Michelle Mack and artist Victor Leshyk from the Center for Ecosystem Science and Society at NAU, Lisa Thompson from Arizona Geological Survey at the University of Arizona, and Kevin Schaefer from the National Snow and Ice Data Center at the University of Colorado Boulder.

The team is zeroing in on the Arctic because climate warming is altering this region rapidly in ways that affect climate, infrastructure and public health around the globe.

Over the past three decades, the Arctic has warmed at twice the rate of the rest of the world and permafrost has started to thaw. Thawing permafrost releases enormous amounts of previously frozen greenhouse gases to the atmosphere, accelerating the pace of climate change. Permafrost thaw can also threaten the food security and clean water of local residents, lead to the erosion of landscapes, the collapse of buildings and roads, and increased risk of wildfires.

These impacts make it important for the general public to understand how the Arctic is changing and why these changes have significant consequences for people around the world. But the remoteness and inaccessibility of the Arctic makes teaching students about permafrost and its consequences challenging.

The team hopes Polar Explorer will change that by creating an adaptive learning environment built around a series of immersive virtual field trips (iVFTs), an approach pioneered by ASU’s Center for Education Through Exploration. Students will be able to visit scientifically accurate landscapes and interact with them as if they were physically there — regardless of a student’s socioeconomic background, physical ability or level of academic preparation.

“What’s particularly exciting about this project is the opportunity to study how iVFTs help students to learn difficult concepts such as working across multiple scales and understanding transdisciplinary connections,” said Mead, who is an assistant research scientist at ASU’s School of Earth and Space Exploration. “These skills are inherent to polar science, and they are absolutely critical for preparing students to solve the challenges of the 21st century.”

For example, to examine the connections between carbon and permafrost, students will travel (virtually) to the Carbon in Permafrost Heating Experimental Research site in Healy, Alaska, where NAU researcher Ted Schuur has been studying permafrost for over a decade.

Starting in the cabin where Schuur’s research team lives during the summer, students will hear neighborhood sled dogs howl. At the field site, they will measure carbon dioxide emissions, examine carbon dioxide and temperature data output in real time, and make other virtual measurements to compare permafrost thaw depths in plots that were warmed versus those that were not.

“Polar Explorer will put students in the field, so they are not just reading about the dramatic changes we observe in the Arctic, but experiencing them,” said Schaefer, a research scientist at the National Snow and Ice Data Center.

Each student navigating the iVFTs within Polar Explorer will have a unique experience, receiving personalized feedback appropriate to their needs while working toward the same learning outcomes as their peers. The team will test Polar Explorer in undergraduate courses at NAU before making it free and available to all college-level students with access to the internet and a modern web browser.

The COVID-19 pandemic increased the need for outcome-driven, distance learning resources for teachers at all levels, and Polar Explorer meets that need, said Thompson, a research scientist at the Arizona Geological Survey. “Intelligent tutoring systems have been tested in undergraduate science classes at NAU, ASU and around the nation and world,” she said. “We have the technology, and now is an important time to bring the rapidly changing Arctic to student’s devices.”

This article was written by Kate Petersen of NAU with contributions from Karin Valentine of ASU’s School of Earth and Space Exploration.

This press release was produced by Arizona State University. The views expressed here are the author’s own.