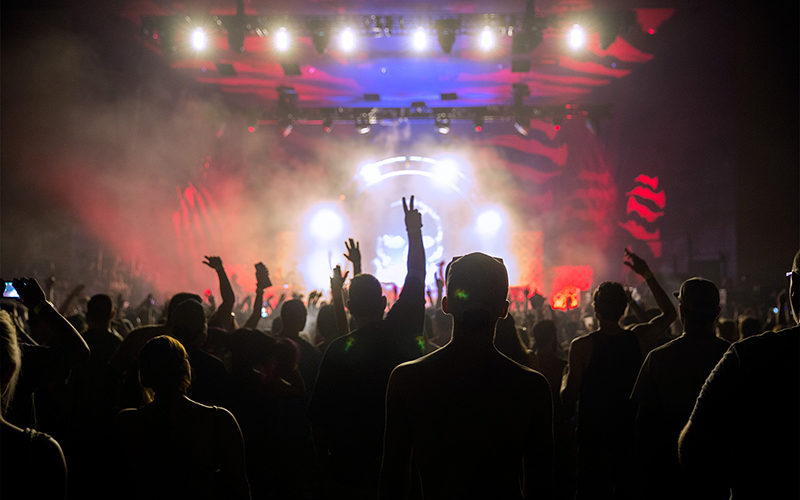 Unlike restaurants or stores that could offer carryout or limited service, concert venues were shut down entirely by the COVID-19 pandemic. After months of delay, a $16 billion federal relief program has started releasing funds, but venue operators say they need the money now. (File photo by Natalie Griffin/News21)

WASHINGTON – Federal officials have awarded $45.3 million in COVID-19 relief funds to 68 Arizona concert venues, a vast improvement over the single grant awarded a month ago but still far short of the need, advocates say.

The Arizona funding was part of the $3.2 billion awarded as of Tuesday by the Small Business Administration under the $16 billion Shuttered Venue Operators Grant.

The disastrous June rollout of the program – more than six months after funding was approved – led to a staff overhaul at SBA. While some venue owners and operators in Arizona said this week they were finally feeling some relief, others said they are still “anxiously waiting” months after applying for assistance.

Jenny Thomas, director of communications for the Association of Performing Arts Professionals, said she is “extremely appreciative of this essential support that has the potential to save the live performing arts industry.” But the grants need to be processed much faster, she said.

“According to the SBA’s latest report, only 28% of applications have resulted in an award, and only about 18% of awards, or just over $2 billion, have been disbursed, more than six months after the law was enacted,” Thomas said.

For organizations like Arizona Arts Live in Tucson, every day of delay hurts.

“We’re hoping the SVOG money comes through soon,” said Chad Herzog, executive director of the group that used to be known as UA Presents. While they wait for word on funding, he said, all their efforts to maintain business during the pandemic have come at “a tremendous loss.”

It is not clear how many Arizona businesses are still waiting or have been denied: The SBA does not release those numbers by state. But nationally, the agency said it has received 14,884 applications and has awarded grants to 4,222 of the businesses, an approval rate of 28%. Just 364 have had their applications declined so far.

That is a sharp improvement compared to early June, when SBA had approved just 90 applications, including the one in Arizona, a rollout that critics called “disastrous.” It brought complaints from Congress, letters and news conferences by advocates, and led to a staff shakeup at SBA, which took steps to streamline and speed up the approval process.

By late June, the agency had abandoned a previous tiered review process and was processing applications as they arrived, according to an emailed statement at the time from an SBA spokesperson. The agency did not immediately respond to requests for comment for this story.

Bonnie Schock, executive director of Fox Tucson Theatre, said her organization learned from the SBA last week that it had qualified for $1.4 million in aid, money she said “quite literally saved our stages.”

“This reinfusion of capital allows us to hire the staff we have to have to bring our businesses back to open, and to actually reschedule shows,” she said.

Disbursement was not automatic: It took about a week to submit the necessary documentation and watch required videos before the money landed in the Fox’s bank account, Schock said.

“For us it moved very quickly, but that’s not the case for many others,” she said.

While SBA efforts have “definitely shifted,” Schock said, “significant stress” still remains for those who have not heard back about their application, or for those whose applications were denied without an explanation.

“Only a small fraction of venues have actually received their grants,” Steve Chilton, vice president of the National Independent Venue Association, said in an email statement.

“They (the SBA) are still working far too slowly and need to get the funds out,” said Chilton, who also owns the Rebel Lounge in Phoenix.

Herzog, whose organization was going through a rebranding on top of everything else during the pandemic, said it’s been a tough year.

“We’ve received little support from the university,” he said. The venue cannot generate revenue without ticket sales, he said, and while few virtual concerts have brought donations, that money went directly to the artists.

In the meantime, all he can do is wait and hope he gets funded.

“You can only hit refresh on that screen so many times a day,” he said.

Thomas acknowledged that “the SBA is moving as quickly as it can,” but that the industry’s need is desperate and the funding is there.

“At this moment though, as the country is reopening, there is $14 billion in financial fuel still waiting to be poured into the economy that will not only help restart the live performance ecosystem, but also ignite the economies of the communities in which these events happen,” she said.

“Every day counts for these businesses that can’t pay their bills, can’t rehire staff, and are at risk for closing permanently,” Thomas said.