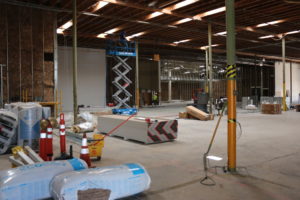 A lot of people can look at Arizona’s business growth and wonder how it affects them, Ptak said.

The summer of 2021 is leading the record books for businesses relocating to Arizona, including semiconductor manufacturers, electric car makers and many other tech companies. While most relocations and expansions are happening in the Valley, Northern Arizona is also attracting companies.

In east Flagstaff, the large former Walgreens distribution is being remodeled by UACJ Automotive Whitehall Industries. The company specializes in electric car components for manufacturers including Tesla and Lucid Motors, which recently chose to expand on a 500-acre property in Casa Grande, south of Phoenix.

“Arizona is now a leader in electric vehicle manufacturing,” said Gail Jackson, president and CEO of the Economic Collaborative of Northern Arizona (ECoNA). “Once they are through their five-year plan, UACJ Automotive Whitehall Industries will be the largest new employer since the 1970s.” The company’s plans include building a new Flagstaff facility and hiring more than 300 people.

Jackson, whose work includes supporting established local businesses, also regularly talks to executives from out of the area who are looking to relocate or expand operations. She recently had inquiries from two smaller-scale semiconductor manufacturers, noting that interested parties think Flagstaff’s outdoor lifestyle would help them attract the workforce they need.

While the pandemic has accelerated relocations by proving that work can get done anywhere, Jackson said the business migrations have been underway for several years. One catalyst is California’s notoriously high cost of doing business, she added.

Arizona will need to prepare more college students for the state’s many new jobs and industries, said Jackson. Other concerns for the greater Flagstaff region, including limited housing and ancillary services like childcare, are issues facing communities throughout the country, although the shortcomings may be magnified in Arizona.

The state has come quite a distance from being one of the hardest hit during the Great Recession, said Patrick Ptak of the Arizona Commerce Authority. The senior vice president of executive initiatives said that after 300,000 jobs were lost and $3 million in state revenues dried up, state leaders realized the urgent need for economic diversification. The Arizona Commerce Authority was then created, with the focus on attracting high value industries like aerospace, defense, biopharma and technology.

A decade after ACA’s inception, new business construction and renovations are underway across the state, said Ptak. “Arizona offers the complete package, with a highly skilled and growing workforce, low-cost business environment, affordable and reliable energy, and proximity to some of the biggest markets a day’s drive away.”

Ptak said these changes in what he calls Arizona’s robust innovation ecosystem will likely continue because tech companies want to be near other pioneers. Major companies like Intel, Raytheon, Benchmark Electronics and numerous others are driving these advancements in the state, he added, along with Arizona State University, Northern Arizona University and the University of Arizona.

A lot of people can look at Arizona’s business growth and wonder how it affects them, Ptak said. He quotes the Bureau of Economic Analysis statistics showing that state residents experienced some of the country’s most significant wage and personal income growth during the past year.

“When you are bringing in more high paying jobs, it has a growth effect for the entire economy, with more people spending money at local restaurants, businesses and traveling to other parts of the state,” said Ptak.

Steven Scully, who opened Flagstaff’s Karma Sushi 15 years ago, sees Arizona’s growth as good for business. He doubled his restaurant space during the pandemic, taking a risk in the middle of great uncertainty. His business model was already tailored toward takeout service, which helped with operations when restaurants faced mandatory closures. He has a 60-person staff and would like to hire additional employees.

Arizonans are comfortable getting out and many are driving to Flagstaff to escape triple-digit temperatures. As company relocations bring more people to the state, Scully hopes Flagstaff residents will insist on maintaining the delicate downtown culture and its small businesses. One solution, said Scully, is that individuals follow the innovative and entrepreneurial spirit seen throughout the state, and open new, locally owned businesses in Flagstaff. FBN