“Jesus Christ Superstar” is a show where two worlds collide as it brings the musical stylings of a rock concert — true to the original 1971 album of the same name — to the Broadway stage, complete with powerful vocals and fierce choreography. From Jan. 31 through Feb. 5, “Jesus Christ Superstar” will rock the stage at Arizona State University Gammage.

This musical is a story that many are familiar with as it shows Jesus’ life in the final weeks before crucifixion with one small twist: The story is told through the eyes of one of the 12 Apostles — the one who betrays him­ — Judas. 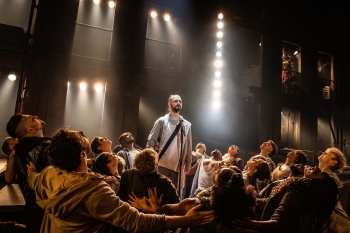 Jack Hopewell and the company of the North American Tour of “Jesus Christ Superstar.” Photo by Evan Zimmerman for MurphyMade Download Full Image

“’Jesus Christ Superstar’ is a rock musical about friendship, power and betrayal to its core, and it really shines in those elements,” said cast member Nicholas Hambruch. “It’s put on almost as a rock concert. It is emotional and guttural and intense, and it’s great because it brings the story everyone knows to a much more human element.”

This show has an obvious biblical narrative, with storytelling elements that are tied to the world of music. Jesus is portrayed as this new up-and-comer in a world of old rock legends and record labels. Even in the stage and prop design, there are microphones and instruments hidden in plain sight that add to the worldbuilding of the story.

Hambruch portrays Pontius Pilate, a key character that comes into play during the second act. He comes from the old world of music and is the figurehead that the characters in “Jesus Christ Superstar” turn to when it comes to deciding the fate of Jesus.

He is “someone who is put in an impossible position and doesn’t really know what to do, and the whole decision is put on his lap,” said Hambruch. “There’s this moral divide where he doesn’t want to kill this man for no reason but when faced with an angry mob, he knows that once they do this, he’s done too — he’s going to fall with Jesus.”

Something big that this musical adds to the original album is the choreography and dance elements that tie into the lyrics and staging.

“It’s so interesting as you get to do these stories that everyone knows and loves, but it’s so different this time around because of our direction, and our choreography is so much more physical than people have seen in the past. Dance is a huge storyteller of this,” said cast member Kalei Cotecson.

Cotecson is in the ensemble throughout the entire musical. She is one of the members of the angry mob that guide the story to its end. This is a very physically demanding role in the show, and Cotecson has to balance many hats for this role with her many appearances.

“This is such an ensemble piece. The mob is just a huge part of telling how things catapulted and got so intense so quickly, and we do show that incredibly physically onstage. It’s very predominant the entire show — a lot of movements and so little time to catch your breath,” Cotecson said.

It’s common to get homesick after being on tour for so long, but for some lucky cast and crew, where they call home is one of the stops on the road. This is the case for both Hambruch and Cotecson, who have both spent most of their lives in Arizona. 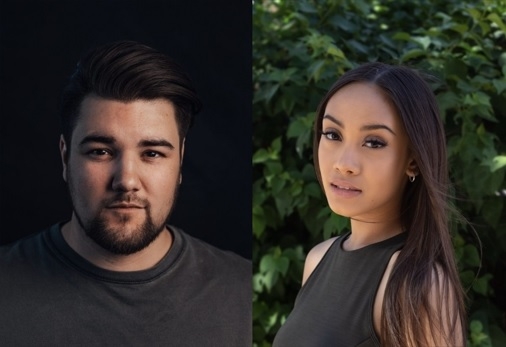 “The cast is really excited to come to Arizona specifically because this is my home state. I’ve really missed the sun, and I’ve been telling everyone how nice it’ll be when we get there. We all like to do things specific to each area, so we will definitely be hiking while we’re there, and best of all, I will get to see my family,” Cotecson said.

Both actors also have ties to ASU. Hambruch has many friends and connections here after he auditioned for the ASU School of Music, and Cotecson’s parents met while going to ASU and both sang in the choir.

“It’s a really full-circle moment for me performing at ASU. I’m really glad to be able to come back and see everybody and be in my hometown,” said Hambruch. “Arizona is really wonderful, and I love all the places that I’ve gone to so far, I really do, but I am excited to get back home.”

While “Jesus Christ Superstar” tells a religious story, it is not necessarily a religious show. The emotional and religious context will come from the audience. It is the story that some people are familiar with, but the show itself makes no attempt to sway audiences to think one way or another about religion.

“The show is a show for everyone both religious and nonreligious. This is a story of two people and how power and greed put a divide in that friendship, and what you take out of it is entirely up to you. That’s true amongst the cast as well. Even the cast has very different roles, religious beliefs and different views, and it doesn’t matter at all – everyone loves each other equally,” Hambruch said.

The show highlights the voices and talents of its cast while remaining true to the original album as its source material. The show has power ballads and intense duets that bring the show along a course of highs and lows that follow Jesus and Judas. There are moments of fun and laughter followed by somber moments of solitude and regret.

“The people are very amazing, and the story is so loaded; not only is it very entertaining and fun to sing along to, but you leave the room feeling something more. I really do love that it brings it down at the end on a note that makes you think about everything, and it has the opportunity to ignite real emotion in people and spark new conversation,” Cotecson said.