After six and a half years in office, Governor Ducey’s legacy remains unclear. With the 2021 legislative term now in overtime  and major political figures  announcing to succeed him, the Governor will soon be a lame duck. Next year’s legislative session will be his last.

Ducey hasn’t been a bad governor. Basically, he’s been a moderate, pro-business Republican. Nothing wrong with that. Arizona has grown and prospered under his tenue. But you could say that about most of Arizona’s governors, including Democrats.

Ducey’s  public image is earnest and ambitious. Some might say a little bland.  He came to office with top notch, executive experience in the private sector and as a former State Treasurer.  He knows how  to use the powers  of a  Governor. As a politician he’s been  cautious.  Some might say a little too much  so.  Without really intending to,  he’s  managed to  antagonize the conservative base of the Republican party. His support for Red Flag Laws, his cave-in to Red for Ed radicals, his failure to speak out strongly on sanctuary policies for illegals, and what many see as his lackluster support for President Trump, have alienated a lot of rural, white conservatives. He was booed at the 2020 GOP State Convention. In 2021 he didn’t bother to show up. The Maricopa GOP censured him along with Cindy McCain and Jeff Flake.

To understand Ducey you need to know that he is a product of the McCain machine. Like McCain he shunned Trump rallies in the 2016 campaign. In 2020, President Trump held six rallies in  Arizona. This time conservatives welcomed Ducey to the stage. But many of us saw his support for the President as opportunistic and proforma.  Ultimately, he failed to deliver Arizona to Trump and presided over stunning Republican reversals. In the aftermath of the election, he failed to understand the depth and tenacity of Trump’s hold on the Republican base. This leaves Ducey with a clouded political future and no clear path forward. 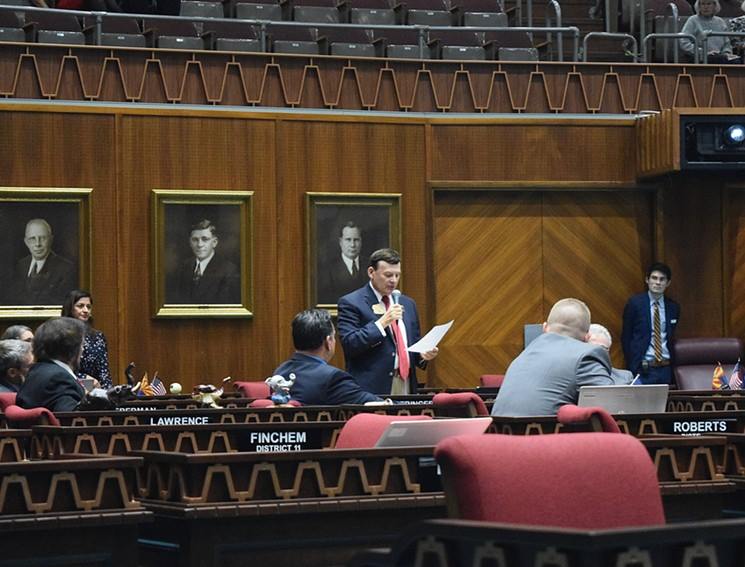 In 2018, when I was running for reelection to the Arizona Legislature, I referred to illegal immigration as an “existential threat” to the United States. Governor Ducey was one of the first state level Republican officials to denounce me. In a speech before the Prescott Republican Men’s Forum in June of that year, I pointed out that Arizona’s public schools were already “majority minority” and that the state’s rapidly changing demographics would eventually make it impossible for Republicans to win statewide races. For speaking this obvious truth, Ducey smeared me as a racist.

In retrospect my comments look pretty tame–maybe even prophetic. Voters are much more racially aware now than they were even three years ago. When I spoke in 2018, the racial breakdown in Arizona’s public schools was 40% white and 60% children of color. The most recent census puts those figures at 38% white and 62% children of color. That’s not the case in my hometown of Prescott which is 91% white. But it’s obvious that the state as a whole is moving in another direction.

Ducey’s denunciation reflected a form of white toadyism on the race issue that dominates the Republican Establishment. But if it’s racist for me to point out an obvious truth about the racial make-up of the state, I wonder what Ducey thinks about the 62,000 voters in LD1 who returned me to office in 2018 as the second highest vote getter in the state legislature? Does the Republican Establishment think that predominately white precincts of the state are racist?  How do they plan to win elections without us?

In Ducey’s ten-year career in public office, a lot of nasty things have been said about white people. I can’t think of an instance where he has spoken up publicly in support of his own race. He thinks it’s bad politics. He still thinks people of color will vote Republican if white politicians grovel deeply enough.

In light of this ugly history, why am I offering two cheers for Governor Ducey?  The answer is that good public policy is more important than the personalities behind them. Nobody likes being smeared with false accusations. But in the rancid political world of today, it comes with the territory. I can shrug off personal attacks in the interest of supporting good public policy. I am now cheering Governor Ducey’s proposal to flatten our state income tax as a potential benefit to every taxpayer in our state.  If he pulls it off, it’s a potential legacy for the Governor that could breathe new life into his political future.

I suspect Governor Ducey might be embarrassed to learn that he deserves at least some of the credit for my first election to the State House of Representatives.  In June of 2016, the National Review did a cover story on Ducey as one of the up and coming Western governors. In an article touting his fiscally conservative principles,  he was quoted as saying one of his top goals was to reduce Arizona’s state income tax to “as close to zero as possible”.

Eight states do not have a state income tax. I grew up in Alaska which is one of those happy places that doesn’t treat its citizens as milk cows for the welfare state.  Arizona did not have a personal income tax until 1978. The idea of abolishing Arizona’s state income tax holds great appeal. In my campaign for the state legislature, I began to advocate getting rid of it.  In dozens of public appearances all over LD1 I would announce that “I want to go to Phoenix to help Governor Ducey get rid of the state income tax.”  My first election to the legislature was a close run thing.  I  will always feel  grateful to Governor Ducey for  giving me such a great issue.

Ducey is a true fiscal conservative. I’m convinced his desire to eliminate the state income tax is not a campaign gimmick. In my first year in the legislature, I attended an event the Governor hosted for Art Laffer, one of President Reagan’s supply side gurus and the author of Rich States, Poor States, which lays out the advantages of low taxes as an engine of prosperity. Ducey was all in.

Until now the fiscal circumstances of our state have prevented substantial tax reductions. But in 2021, the stars are aligned. The Governor should spare no effort. Recalcitrant legislators always have pet projects. He should make whatever deals are needed to give Arizona a fairer and flatter state income tax.